A Wrinkle in Time Movie Review: So Centered in Joy, Cynics Need Not Apply

by Leslie CombemaleMarch 8, 2018August 15, 2018Leave a Comment on A Wrinkle in Time Movie Review: So Centered in Joy, Cynics Need Not Apply 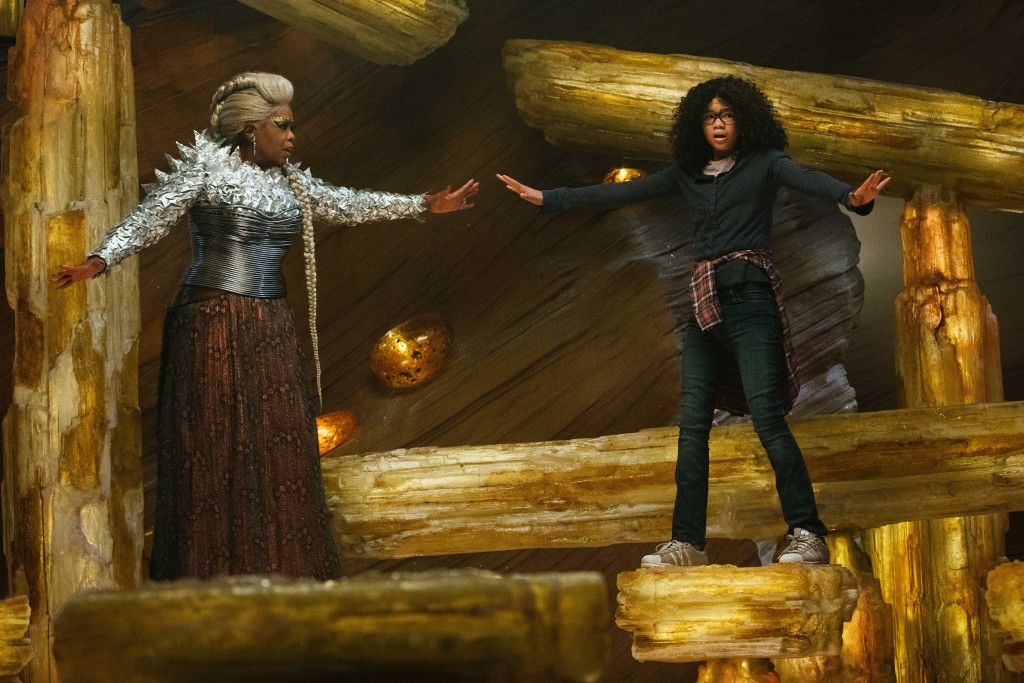 Sparkle alert!  If you’ve seen any of the trailers for the highly-publicized cinematic rendering of Madeline L’Engle’s classic 1962 children’s novel A Wrinkle in Time, you know sparkle figures prominently. Director Ava DuVernay, who has the distinction of being the first women of color to direct of live action film with a budget over 100 million dollars, wanted to celebrate a story she saw as suffused with the joy, innocence, and optimism of childhood.  For children from around ten years of age through to children at heart in their nineties, it is a cinematic delight, but cynics and pessimists need not apply.  This sparkle is not for you.

Middle school student Meg Murry (Storm Reid) struggles with self esteem issues, as does every typical tween.  Her parents, Mr. and Mrs. Murry (Chris Pine and Gugu Mbatha-Raw) are famous physicists who are researching theories in intergalactic travel. After Mr. Murray, who has discovered something he calls tessering, which is a wrinkle in time that allows for inter-dimensional travel, disappears and has been gone for four years, Meg, her classmate Calvin (Levi Miller) and her genius little brother Charles Wallace (Deric McCabe), commit to a journey through the cosmos to find him.  They are aided by three celestial wise women.

The celestial guides, as in the book, are a manifestation of the triple goddess of maiden, mother, and crone, and give the film its strong spiritual underpinning. Reese Witherspoon’s Mrs. Whatsit, Mindy Kaling’s Mrs. Who, and Oprah Winfrey’s Mrs. Which serve respectively as each archetype.  They bring wisdom and comfort to the children as they travel through time and space.  They also warn of a darkness that has infiltrated the universe and threatens to destroy Mr. Murray, as well as the rest of creation.

This film is all about confronting fear and embracing our flaws, as well as harnessing the power of individuality and self expression.  It’s a message, as translated from the book by screenwriter Jennifer Lee and directed for the big screen by DuVernay, that is entirely devoid of cynicism, and is seated firmly in joy and the power of love.  Even the costumes are an expression of this, as evidenced by the technicolor makeup and bejeweled eyebrows.

I can certainly see why it might come under fire by critics, either for not following the book word for word, (an accusation all too common in any screen adaptation of a classic) or for the barrage of ever-changing hyper-colorized landscapes.

To be fair, the script is a bit heavy on sweetness, and even ventures into the trite at times, but perhaps we all need a correction from the near constant negativity and hate we are pummeled with by our current administration. What’s so wrong with a movie filled with messages of love, self-acceptance, and sparkle, led by a lovely, quirky girl of color?

Nothing, I say.  Put on your shiniest attire and tesser over to your closest theater.  You’ll be treated to a movie that embraces its own optimism and demands empathy.  We could all do well to take it in.